Harnessing the power of light to boost energy levels and spread happiness throughout the studio – and into people’s homes. Kate Cracknell pays a visit to FirstLight, London’s new boutique cycling studio.

“I first came up with the idea for FirstLight Cycle in the lobby of a New York hotel,” says Mark Anthony, the former celebrity PT turned indoor cycling enthusiast, sitting in the bright reception area of his newly-opened boutique cycling studio.

“I’d gone out to New York to look at the cycling scene there and was immediately hooked. I loved what the studios gave me: the energy of working out as a group rather than one-to-one.

“I had previously worked as a personal trainer, operating at the top of my profession for two decades, but the time had come where I no longer felt I had the energy to get up at 4.00am and go to bed at 1.00am every day. I felt opening a cycling studio might be a good next step for me.

“I had already started mulling over how I might do this when I found myself watching an incredible sunrise over New York through a huge window in my hotel lobby. I thought to myself: ‘How incredible would it be to run a group cycling class right here, with this view?’ That was the beginning of FirstLight.

“This was back in 2014, so it’s taken time to come to fruition – I’ve had to find the right technology to recreate that solar experience, as well as finding the right location. Really, the property market in London is a bidding war nowadays, and it’s taken us a long time to find the right space.

“But we’re here now, we have a strong vision, we’re clear what we stand for, and I believe we can become a key player in the boutique market over the coming years.” 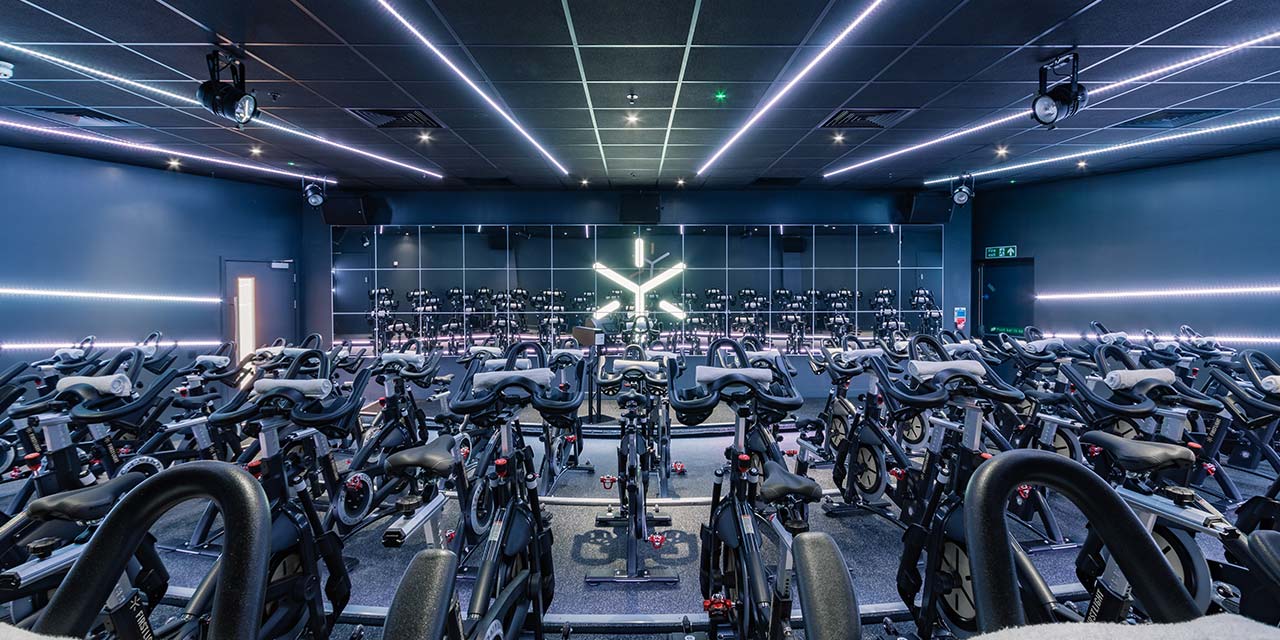 Journey of the sun

He continues: “The concept of FirstLight is centred on harnessing the combined power of light and exercise, both of which have huge benefits for our body and our soul.

“Studio 1 houses our signature cycling concept, which revolves around the journey of the sun: from first light through high noon to sunset. There’s a 30ft screen filling the front wall of the studio, so you find yourself immersed in a landscape over which the sun rises, moves across the sky and then sets. This simulated sunshine is designed to boost participants’ energy levels and mood – sunshine makes us happy.

“The screen is also a mirror, so our instructors – we call them our maestros – can switch between the two to suit their class structure. We create threads they have to follow in their programming – we dictate the high points based on the phases of the sun, which is reflected in the prescribed BPM of the music – but they choose their own tracks and do their own choreography around these threads. In this way, they can create their own signature workouts, each of which we review and approve before they’re allowed to use them in the studio.

“We also put our maestros, all of whom are employed by us rather than freelance, through eight weeks of training at our academy, so they absolutely understand our concept and our expectation of robust, credible workouts.”

“But we have 9,000sq ft of space here, which is large for a boutique. It means that, in addition to our 58-bike studio 1, we’ve been able to create two further studios.

“Studios 2 and 3 will open in January: a 40-capacity boxing studio, where the sun will gradually work its way from east to west above your head, rather than across a screen at the front of the cycling studio; and a 21-bike HIIT cycling studio, which will be dark and intense and raw, with tough workouts that last half an hour as opposed to the 45- or 60-minute classes in studio 1.”

He adds: “My uncle used to be heavyweight boxing champion of Asia, so I’ve grown up with boxing. Meanwhile, my personal expertise is strength training. We’ve combined both of these elements to create a unique twist on a boxing class, combining free weights with punchbags where you ‘punch by number’ – the bags are marked up to show exactly where to hit them.

WE DICTATE THE HIGH POINTS BASED ON THE PHASES OF THE SUN, WHICH IS REFLECTED IN THE BPM OF THE MUSIC – Mark Anthony

“We’ll also be introducing some more challenging cycling workouts into the timetable over the coming weeks, even in studio 1. At the moment, it’s a fairly comfortable ride. We’ll still offer that – our audience is mostly 35- to 60-year-olds and we don’t want to alienate anyone – but younger riders tend to want something a bit tougher, so we’ll be addressing that.”

The future is live

Anthony continues: “The other thing we’re launching in January is home streaming, and this will be central to our whole business model moving forward. I firmly believe people are
increasingly leaning towards home fitness, so all three of our studios have been built with this technology embedded.

“Our boxing studio has two cameras, so the maestro can switch between them and talk directly to people taking part from home; they’ll be shadow boxing rather than using a bag, so all they need is a bench and some dumbbells, which we can sell to them. We’re still working out how to fully convey the journey of the sun when we live stream our boxing classes, because people will be streaming it to their TVs.

“However, for the cycling classes we have a really exciting innovation: we’ll be unveiling our own Peloton-style home fitness bike in January.
FirstLight classes will be live streamed to its 22-inch screen – the maestro will be able to see exactly who’s tuning in, so they can give them a shout out – but there will also be a frame around the screen. This will emit light throughout the class, in line with the phases of the sun, so at-home exercisers experience all the feelgood benefits of our studio-based workouts.” 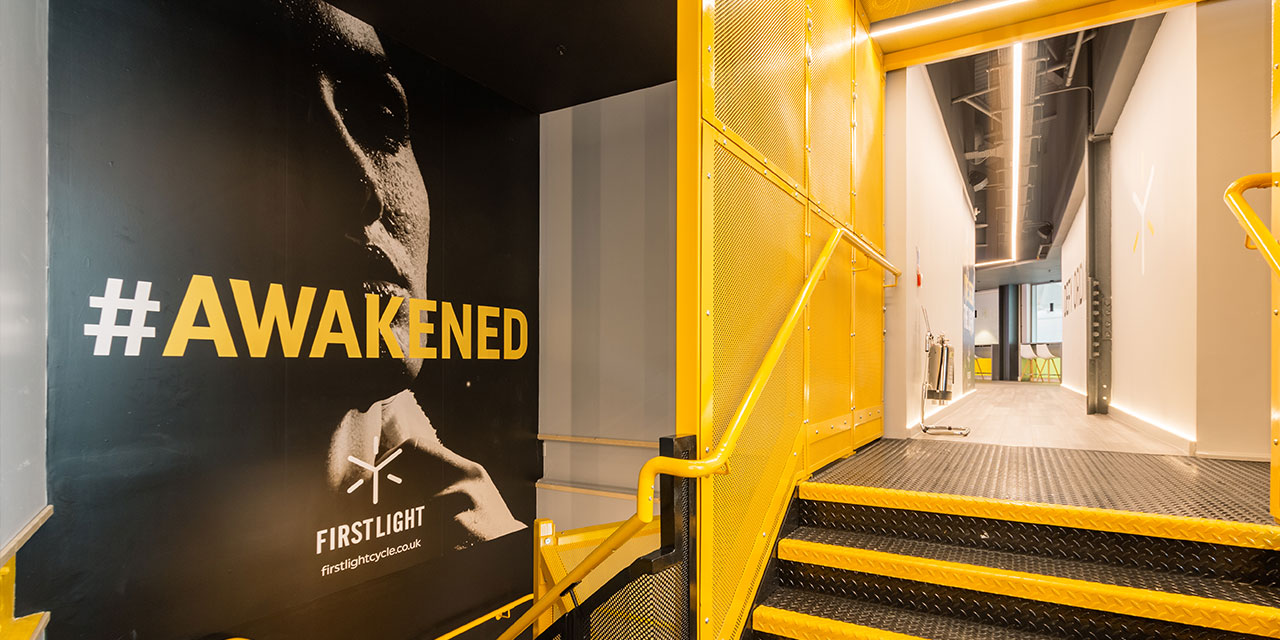 “We had originally planned to launch a second studio in London, but we aren’t doing that any more. We may eventually open other studios if we move into Europe and the US, but there will be no more in the UK,” adds Anthony.

“That’s because I believe the future of indoor cycling – in fact, the future of all genres of exercise – is streaming. We’re gearing our whole set-up around this, which is why I’ve invested in bringing the very best technology to this 9,000sq ft studio. This will be our hub.

“In fact, I also believe streaming is the way to get men involved in group exercise. They don’t want to come into a studio environment – 85 per cent of our customers at FirstLight are women – but being able to train from home makes all the difference. In addition, whereas our studio classes are all about the experience, the FirstLight at-home bike will also offer stats and performance data – something we believe will further extend our appeal among men.”

He concludes: “I do think you need a strong
story to make live streaming work, but I believe our light-centred classes have what it takes. As we build our brand and extend our reach, I
believe FirstLight will become a brand that people love to follow.”