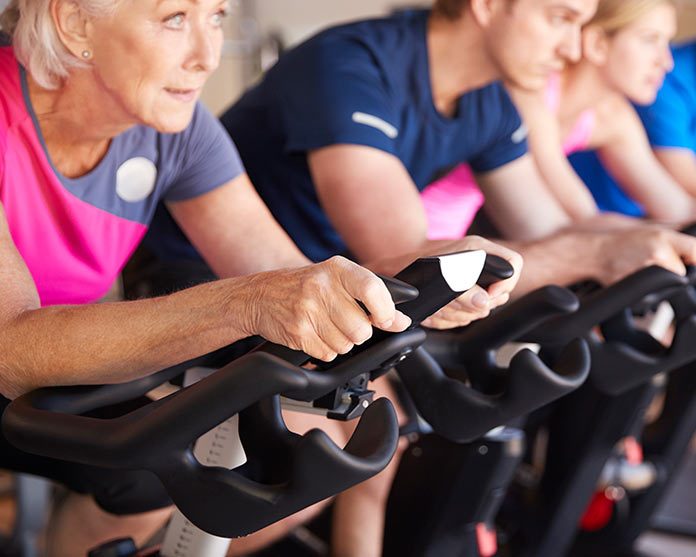 Interval training on an indoor cycle could just be the best form of exercise to keep muscles firing on all cylinders as we age. Ride High magazine reports…

Exercise is good for you – that much is all but undisputed. But could it be that it actually gets better for you as you get older?

This was the fascinating question at the heart of a study – published in the journal Cell
Metabolism and reported in The New York Times – which looked at the impact different forms of exercise can have on a person’s body, and at different stages of their life.

the activated genes influence the ability of mitochondria to produce energy for muscle cells.

Researchers at the Mayo Clinic in the United States conducted an experiment involving 72 healthy but sedentary men and women, all of whom fell into one of two age groups: 30 years or younger; or older than 64. All participants were randomly assigned to a particular exercise routine.

Tests were conducted before the experiment began and again after 12 weeks, measuring aerobic fitness and blood sugar levels, as well as gene activity and mitochondrial health in participants’ muscle cells (mitochondria being the powerhouses within our cells that, among other things, turn the food we eat into the energy we need to function, and that typically dwindle in number and strength as we age – in turn causing our bodies to weaken).

Many of the study’s results were unsurprising. Improvements in fitness and ability to regulate blood sugar were observed across the board. Meanwhile, group 1 experienced the greatest gains in strength and muscle mass, while group 3 saw the most marked improvements in endurance and stamina.

Things became less predictable when it came to the results of the muscle cell biopsies.

Among participants aged 30 and under:

Among participants aged over 64:

And why does this matter? The New York Times concluded: “Many of these affected genes, especially in the cells of the interval trainers, are believed to influence the ability of mitochondria to produce energy for muscle cells; the subjects who did the interval workouts showed increases in the number and health of their mitochondria – an impact that was particularly pronounced among the older cyclists.”

HIIT training on an indoor cycle could, it seems, be the best form of exercise to improve the cellular health of our muscles – and the good news for those of us getting older is that it’s never too late to benefit from this form of exercise.