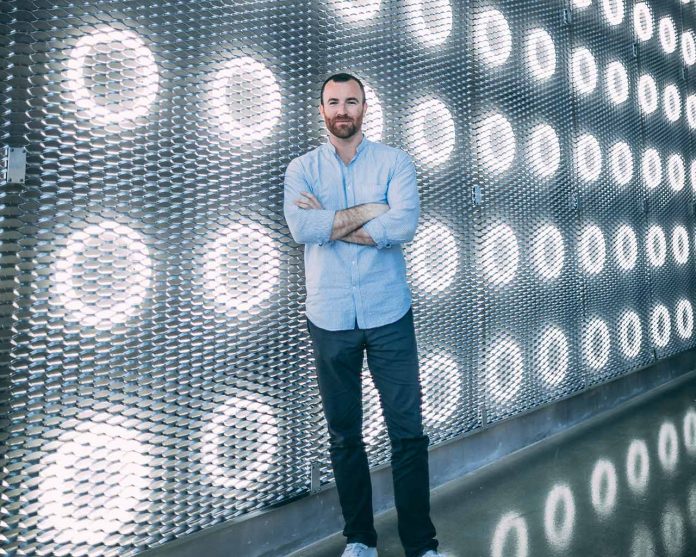 “Our first four clubs are dual-discipline, with the line-up shaped by the location of the club and the interior design opportunities within each building: we have three Ride / Reshape clubs and one Reshape / Rumble club.

“But at 1Rebel Victoria – our latest club, which opened in the newly-constructed Nova building in June of this year – we knew we had an opportunity to do something really different.”

BALFOUR: I believe what we’ve created is the best cycling studio in London – possibly the world – setting a new bar for the sector.

The Experience Economy
Balfour continues: “At 6,500sq ft, 1Rebel Victoria is a good size: our five clubs range from 4,500sq ft to 8,500sq ft. However, the space in Victoria lent itself to the creation of an amazing cycling studio, so we opted to make it our first single discipline club.

“I believe what we’ve created is the best cycling studio in London – possibly the world – setting a new bar for the sector.”

He continues: “The building has amazing ceiling heights, so we were able to put horseshoe balconies into the studio: the riders above look down on the activity below. We hadn’t seen it done anywhere before and it was a big risk. We weren’t sure how it would work with Ride choreography – would people like being up on a balcony, looking down on the instructor? Right up to the last minute of the huge £2m fit-out project, we weren’t sure if we were going to do it. But we did and it works brilliantly, creating the sense of a cycling amphitheatre.” 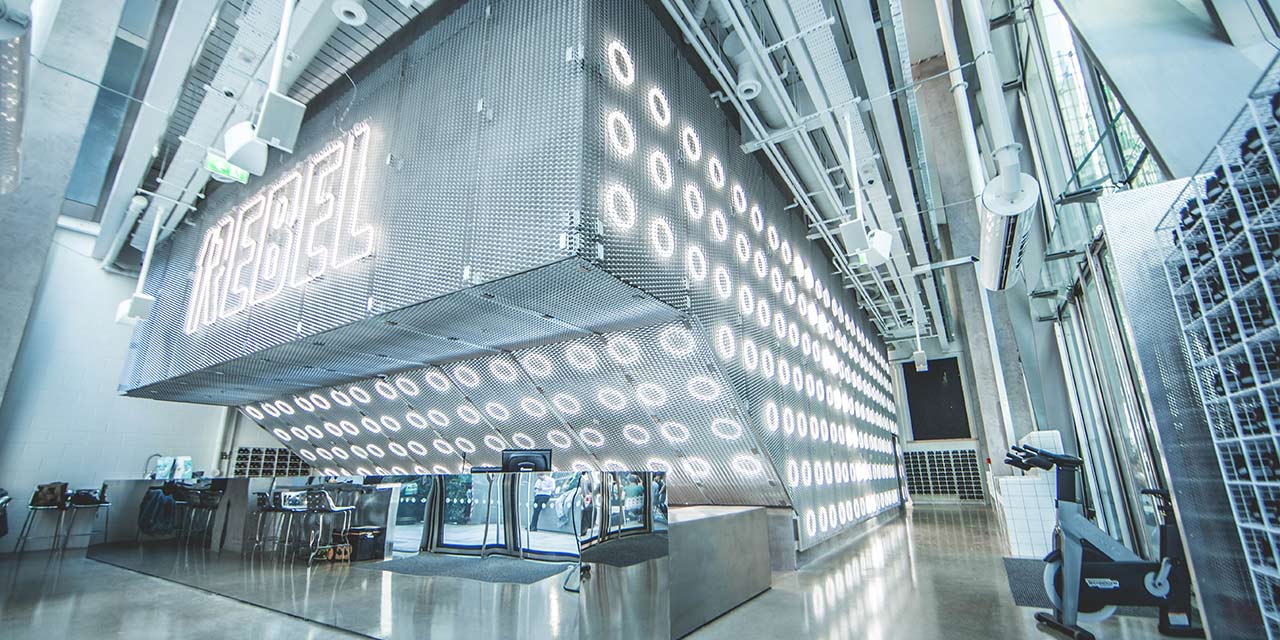 Of course, if you have a space this huge, with so many cyclists – the studio features 83 Technogym bikes – you need to create an experience that’s big enough to fill it… and 1Rebel has proved it’s more than up to the challenge.

“As a business, we see ourselves as operating in the Experience Economy, and this new Ride studio absolutely delivers on that,” says Balfour.

“We have a 3D sound and AV system that’s currently only used in one other place in the world: the Sydney Opera House. We have laser shows, smoke machines, a huge LED screen, a sensory shower system that creates incredible special effects and lighting, and a remote-controlled scissor lift that raises and lowers the instructor platform throughout the class.
“Crucially, we also have amazing instructors who bring the whole thing to life. The music and overall choreography are set by 1Rebel, but our instructors are encouraged to inject their personality into every class, giving everything a sprinkle of their individual brand of fairy dust. 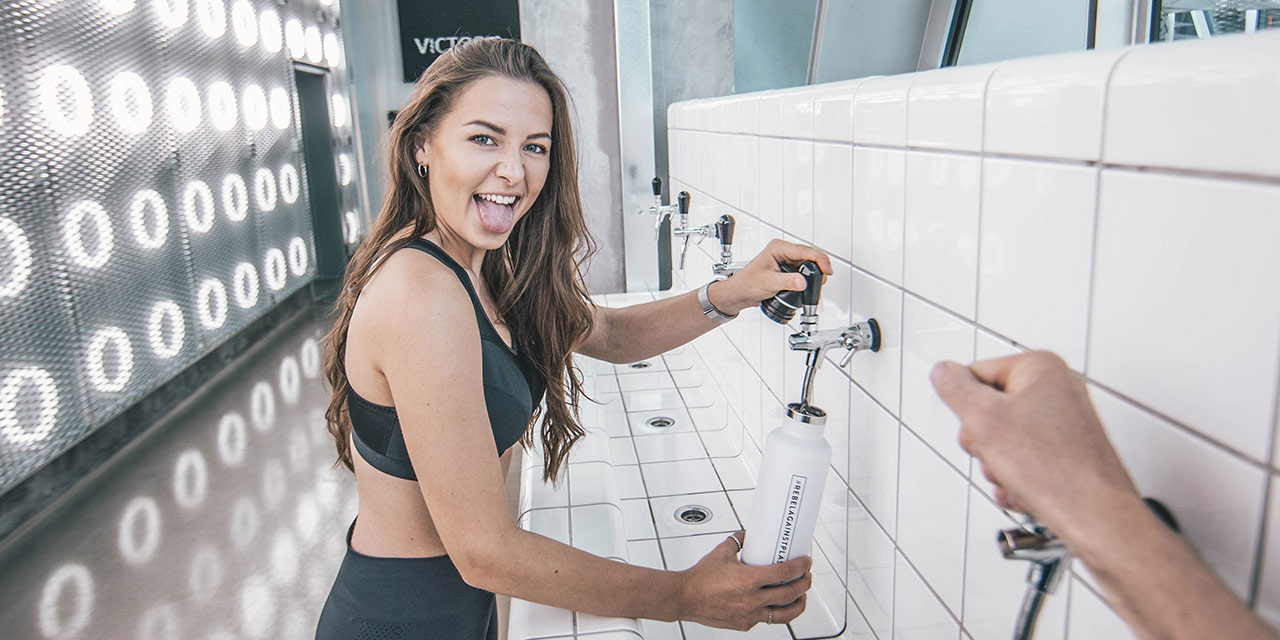 “We don’t want to rely on tech to motivate riders in our clubs: we believe the words that are spoken to you in class are as important as anything else. With our best instructors, the performance is akin to that of a rock star on-stage at Glastonbury.

“We therefore we look after them. Our pay is very competitive – that may well be why instructors come to us in the first place – but they stay because it’s a great place to work. It’s really fun, really social, with a great sense of team. In fact, 30 per cent of our instructors are home-grown – they might previously have been on reception, for example. It’s just a great place to work.”

our instructors are encouraged to inject their personality into every class, giving everything a sprinkle of their individual brand of fairy dust.

Continual evolution
Balfour continues: “Across all 1Rebel clubs, we ensure the experience extends beyond the studio too – and it has to constantly evolve so there’s always something new on offer for the demanding, Experience Economy audience. You can’t just put in eucalyptus-scented towels and a Smeg fridge when you first open and hope that will be enough.

“We have live music events, we take members on adventures, we have Prosecco Fridays – free, drink-all-you-can prosecco for a bit of Retox, because life isn’t all about training. The social spaces at our clubs are very important.

“Less exciting but equally important, we’ve also addressed some of the pressure points you commonly find in boutiques. For example, people in the UK expect all gyms, including boutiques, to offer showers. The Rebel Army – our loyal customer base – is 70 per cent female, so at Victoria we have 15 ladies’ showers. There’s a light outside each that shines red or white to show which are available.”

He adds: “We constantly reinvest in the business too. I believe, when you set out to open a boutique, you should double the budget you think you’re going to need. You have to constantly reinvent yourself.”

Ride again?
Design-wise, too, the club is equally eye-catching outside the studio as in it. “Studio C102, the architect we use across all our clubs, is great at adapting to the space and the location of each club,” says Balfour.

“For example, 1Rebel Southbank takes its inspiration from the Tate Modern, while 1Rebel Victoria takes its inspiration from the theatres that surround it – the whole design of the club is very dramatic. It’s quickly gained the nickname of ‘The Spaceship’ thanks to its modern design: its reflective reception desk, galvanised steel staircase, wall of light and exposed white lacquered brickwork.”

So, will 1Rebel open more standalone Ride studios? “At the moment, we’re looking at three new sites for London next year. These will all be standalone clubs, but they’ll be Rumble or Reshape,” says Balfour.

“In London, the challenge is always finding the right locations – we want ground floor retail frontage in iconic locations, with great landlords – so we have to adapt the offering to the building.

“However, if the right site were to come up, we’d absolutely do another standalone Ride club.”

The spaceship is flying

Prices at 1Rebel Victoria – nicknamed The Spaceship – are the same as at all 1Rebel clubs: £20 for a one-off class, down to £16 per class on a package, and with membership options also available.

“We currently run around 25 Ride classes a week at 1Rebel Victoria, but that’s because we always start lower and build up the timetable in response to occupancy,” explains Balfour. “We’ll ultimately offer around 50 classes a week.”

If the performance to date is anything to go by, things may need to be ramped up quite quickly. “The club only launched a couple of months ago, but our peak classes are already full,” confirms Balfour. “If I look at this week, for example, all 83 bikes for Friday’s 6.30pm class were booked up by Monday. I believe this will be our most profitable club.”