Creating big box gyms where every facet of the offering is best in class, able to rival even the boutiques – that’s the goal at World Gym Australia, as master franchisor Jon Davie explains to Kate Cracknell.

“In World Gym, we have the best of both worlds,” says Jon Davie who in 2006, along with his business partner Mike Nysten, acquired the Australian master franchise rights for the
US-based brand. “World Gym has a strong, global brand and a great brand story – that’s something we were very much looking for – but we were also given the autonomy to take that story, shape it for the Australian market and create a model that works here.”

He continues: “The World Gym story is a really nice one. It was founded by Joe Gold, who had previously created the male-dominated, body-building mecca that is Gold’s Gym. Having stepped away from that, he wanted to create something that was accessible to everyone. The result was World Gym.

“We liked that story and wanted to evolve it for the Australian market. We’ve kept the ‘Seriously fun fitness’ strapline, which is all about offering seriously good fitness opportunities that deliver results, all with a great sense of community and camaraderie. However, we’ve been able to design our own clubs and drive our own positioning.

“We’re keen to be family-friendly and to attract women. We build all our gyms to be non-intimidating for these audiences, and in our newest club our membership is 51 per cent female. Our marketing reflects this. Our view: the quality of our gyms will mean we attract the serious exercisers anyway, without skewing our marketing towards them.

“Because we do offer the best of the best at our gyms: the best equipment, a great
environment, excellent programming, group exercise timetables that typically offer 50–60 live classes a week plus virtual, studios that can each rival any equivalent boutique offering locally. With us, you get the best of everything you need in one place – everything you could want for your fitness regime – and all for around A$20 a week. Not only that, but we offer plenty of crèche and childcare facilities too, so your children can be looked after while you train, and wonderful social café spaces to enjoy with friends afterwards.”

our goal is to create an environment where everyone can find their thing and enjoy their hour of fitness.

Davie adds: “We didn’t want to start going down the route some operators have done, whereby they’ve narrowed their offerings to appeal to very specific audiences. We offer everything from traditional group exercise to heavy lifting, because our goal is to create an environment where everyone can find their thing – where anyone can come in and enjoy their hour of fitness, whatever their chosen form of fitness might be.

“As a result, although our core target market is 17- to 38-year-olds, we also have younger members coming in – some of our gyms are located in schools, and teachers tell us the kids enjoy their PE lessons more when they take place in the gym environment – right up to those aged 80 and above who are looking to improve quality of life and stay mobile. We have women doing Olympic lifting; there’s roughly a 50/50 male/female split on our World Gym Athletics Foundation Levels 1–3, which teach technique to allow you to lift properly and avoid injury. We have men doing yoga to improve their flexibility; we do a lot of social media around ‘athletic yoga’, the importance of stretching for weight lifting and so on.

“But as I say, although ours is a big box model with all these different facets to the offering, the crucial difference in our gyms is that each and every aspect is designed to be the best in the market. We never do anything half-heartedly. Our functional CrossFit-style areas have bespoke World Gym Athletic programming and, we believe, rival the likes of Barry’s Bootcamp and F45; many of our yoga studios are kitted out to offer hot yoga; and our cycling studios draw on what we’ve seen during numerous visits to boutique studios in the States.”

He continues: “In our Burleigh club, for example, the cycling studio is designed like an auditorium. We have a curved room with three tiers of Body Bikes, a sloped roof, a raised pedestal for the instructor. We put a lot of detail into the mood lighting, the textures and design, the sound. We’re fanatical about this – about ensuring instructors don’t have to scream to make themselves heard and that everything blends well with the music.

“But we’re always looking to improve every experience in our clubs, and I can quite see how the studios in the clubs we open next year will be even better, including large screens at the front to run virtual classes. We find virtual to be a great addition across the board of group exercise, but with indoor cycling specifically it adds a new, immersive dimension to the experience.

“So, we’ll push our cycling studios to the next level, and the next, as standards and expectations continue to rise across the sector. We’ll develop more programming and styles of class to complement the classes we already have – RPM and SPRINT, freestyle, DJ nights and marathons – and we’ll add more virtual classes. We’ll find new ways to create a great atmosphere. We’ll build on the sense of club-in-club, potentially creating dedicated areas for cycling-only lockers that will be ready with people’s cleats, towels and water when they arrive. 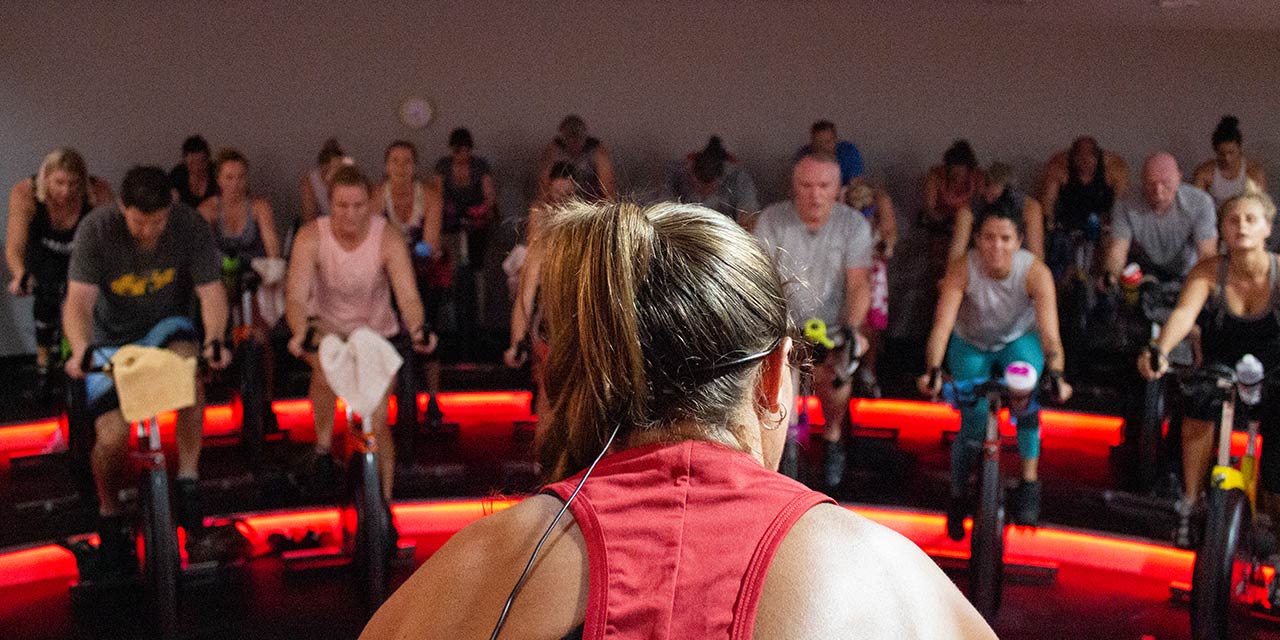 a while ago people were saying indoor cycling would die out, but if anything, it’s getting more important.

“Across all our clubs, cycling is already our most popular class: we typically offer 10–12 live classes a week and we have some members who come to us just for this. We invite feedback through social media that then shapes our timetables: what do you want more of and when do you want it – what day and what time? That often leads to more cycling, or scheduling cycling to be followed immediately afterwards by yoga.

“You know, a while ago people were saying indoor cycling would die out, but our experience is that, if anything, it’s getting more important. We just need to keep evolving to meet consumer demands. Honestly, if I only had space in a club to build one studio – general group exercise or cycling – I’d opt for cycling.”

So, with rumours that SoulCycle is eyeing up Australia after a successful entry into the UK, what does Davie think of the pending threat from the boutiques?

Interestingly, he views the situation not as ‘boutiques versus big box’, but as ‘boutiques + low-cost versus big box’ – and for the Australian market at least, he remains confident in the World Gym model. “Rents and staff costs are so high in Australia that it’s hard to make a real success of the low-cost model,” he explains. “Neither is there the density of population, outside of areas like the Sydney CBD, that boutiques generally need to succeed. So, where in the US people are paying US$10 a month for their gym and US$25+ per class at a boutique on top of this, I don’t think this will happen as easily in Australia.

“Our view is therefore that, provided we can create experiences in our clubs that rival the boutiques, we will likely retain our members.”

But while Davie may not see boutiques as a model suited for roll-out across Australia, there is another model he does see as a strong contender, and that’s the satellite club – the smaller footprint model designed to sit between big box clubs.

“We’re just in the process of taking our World Gym Athletic brand and creating a spin-off satellite model,” he explains. “We’ve already been creating separate areas for this functional training offering within our clubs, to create a club-in-club feel, but our first fully standalone World Gym Athletic studio will open on the Gold Coast later this year. It will be a 400sq m site offering the best functional classes you can do, but for A$30 a week you will also be able to access the nearby World Gym clubs. That’s great value for the members.

“It’s an interesting model for potential franchisees too, as it’s obviously a lower cost of entry: lower rent and all you really need is functional equipment – free weights and so on. Plus we’ve spent a lot of time creating really great programming. I can envisage this appealing to personal trainers who want to take the next step and own their own training space. We hope to open four or five of these studios over the next 12–18 months.”

Meanwhile, plans are to open between seven and 10 World Gyms a year over the next few years – and Davie admits he is “still pinching” himself at the idea they will soon reach 50 sites.

“Our original plan was simply to be gym owners ourselves, with a club in Sydney for Mike and a club on the Gold Coast for me,” he explains. “It was only when Joe Gold suggested we take the franchise that we even considered that option, and in the first five years we only opened three clubs. But it soon sped up as people began to recognise the brand and we got more and more interest from developers, real estate firms and potential franchisees.

“We’re now opening between five and seven clubs a year, have reached 30 clubs in total and will be opening a further eight by April 2020 – and that’s without even really touching on the big markets of Melbourne and Sydney, where we currently have only one and three clubs respectively. Those cities will be our next focus.

“But as we grow, we will stick by our pledge not to over-develop: we don’t want any of our clubs to cannibalise each other. So, for example, in Queensland, which has a population of around 3.4 million people, we now have 14 clubs and I’d say we’re done there. We don’t ever want to have a club that fails. “Neither do we push every growth opportunity: for every franchisee we take on, there are probably 20 or 30 we don’t. We take our time finding great sites and we always offer them to existing franchisees first. More and more of our franchisees are now opening second and third clubs, and that’s very rewarding for us: their willingness to re-invest in World Gym is proof the model works.

“In the end, Mike and I are first and foremost gym owners – I now have three World Gyms of my own, and between all the company directors we own nine – and we always say that we won’t let anyone open a club unless we would open it ourselves. We want every single one of our franchisees to be successful. That, for us, is the measure of our own success.”