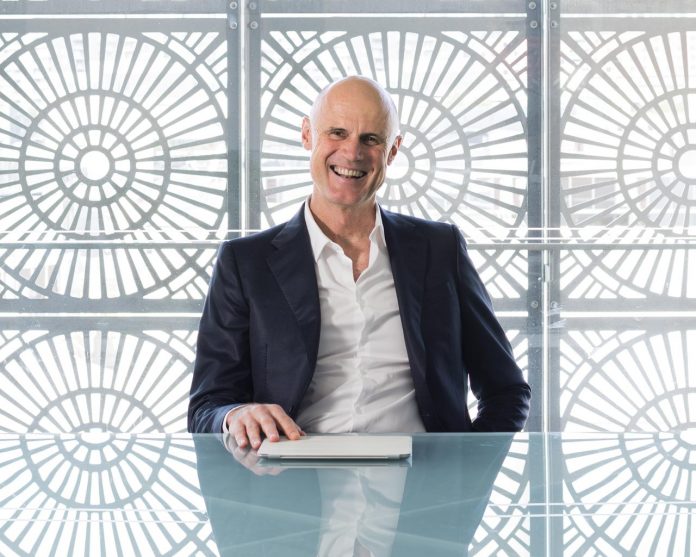 The vital importance of appealing to millennials, the secret of Peloton’s success, and the best cycling boutiques in the world. The founder and MD of Les Mills International speaks to Kate Cracknell

What has the emergence of boutique studios meant for the fitness sector as a whole?
As we all know, the fitness market has been disrupted over the last 15 years, in particular by the low-cost operators – these clubs are just getting better and better – and by the boutiques.

Clubs absolutely have to embrace this market if they want to survive, and that means adapt-ing their offering. Millennials are very different from Baby Boomers and Gen X. In fact, they very consciously don’t want to do what their parents did. Many millennials are therefore bypassing traditional clubs in favour of the boutiques, and it’s vitally important that health club operators realise and respond to this.

Why? Because not only do millennials represent a huge segment of the market, but this is also the age at which habits are formed. The average age of a health club member might be around 40 years old, but our research has found the vast majority of people first join clubs in their 20s; 24 years old is the biggest joining point. Very few people join for the first time after 35 years old, and after the age of 40 the numbers are statistically almost non-existent.

So, you have to get people when they’re in their 20s, or at a push their early 30s – and this is the age group that’s currently being drawn to the boutiques. Our research shows a 5 per cent growth in the number of people doing gym-type activities between 2013 and 2018 – from 28 per cent of the population to 33 per cent – and it’s the boutiques and low-cost club that are benefiting the most.

Only 49 per cent of the market now uses traditional health clubs; the remaining 51 per cent are split across low-cost clubs, boutiques, small local clubs – the Anytime Fitnesses, Jetts and Snaps of this world – and other niches like university and corporate clubs.

And while not all the boutiques are successful – anecdotal evidence suggests around a third are struggling financially – this is still a sector that’s booming. There are now hundreds of thousands of boutique studios around the world and they’re enjoying share of wallet as well as share of market: the average monthly expenditure per member at a traditional club is US$52; at a boutique studio, that figure rises to US$111.

And have traditional clubs evolved?
They have started to, yes, with a number of operators creating boutique-style spaces in their clubs. In the UK, for example, David Lloyd Leisure has launched Blaze, while the Brazilian mar-ket leader – the BioRitmo/Smartfit group – has created a few different styles of in-club boutique. Meanwhile, in New Zealand – following the pre-vious launch of our millennial-targeted, in-club cycling studio Chain – our Les Mills clubs have a couple of millennial-style innovations set to come out this year: a boxing/running class and a functional circuit similar to the F45 model.

It’s these styles of class – in-club boutique offer-ings – that will help traditional clubs to compete with the boutiques. But they have to be done well. It needs to be an authentic environment: a small area with a community feel. Crucially, the programming and the teachers have to be real-ly great. If you look at the successful boutiques – Barry’s Bootcamp, SoulCycle and Flywheel, for example – they’ve created some really cool class-es which are also incredible workouts, and they’re led by amazing instructors.

This is a key point, because it’s in this area – instructors – that traditional clubs have done badly over recent times. Clubs have been allowed to age in this respect: US$22 is still the average instructor fee paid per class in a traditional club, which is pretty much the same as it was in the 1980s. Why would any good instructor settle for that when the average fee for teaching a boutique class is US$50–$100?

Of course, there are some really good hobbyist in-structors out there – people who are doing it for love and who are great at what they do. But this isn’t a model that will bring a new generation of rockstar instructors into traditional clubs. These operators have to start paying instructors more. They need great instructors to deliver great classes if they’re to stand any chance of compet-ing with the boutiques – and the low-cost clubs for that matter.

And there’s no point saying you’ll rely on virtual group exercise. It’s true that the leading virtual classes are taught by great instructors, and it can be a very powerful tool for traditional clubs in off-peak times. But it’s live classes that build a sense of community. It’s instructors who build relationships and drive retention. Plus, most of the low-cost clubs offer virtual classes now. Traditional clubs need to up their game when it comes to live group exercise.

What’s the best place for clubs to start?
Clubs need to look at how and where to create cool boutique areas within their facilities, and the cycling studio is the easiest place to start. Cycle classes deliver the highest profit per square foot

– the number of people you can fit into an area is higher than for any other activity – and most clubs have a cycling studio already. However, in many cases they’ve been allowed to die, running just two or three classes a day.

Meanwhile, cycling is a huge – and growing – category in boutiques; even in traditional clubs, where cycling is done well, anything up to 30 per cent of members will include it in their routines.

And that’s because anyone can do it, it’s a high motivation activity, and it offers great results. There’s also a growing body of research coming out of the big global research institutes show-ing how interval training on a bike can boost metabolism and weight loss, change our DNA to make muscles fitter and healthier, and even im-prove the cellular health and functionality of our muscles as we age.

So, while running, boxing, HIIT, yoga and so on are all opportunities for traditional clubs when it comes to in-house boutique spaces, definitely the most logical place to start would be upgrading existing cycling studios: upgrading the décor, the AV, the programming, the instructor quality by paying for rockstars… If you have great content, great teachers and a great space, you become competitive again.

Can you offer a few examples of great cycling studios that might act as inspiration?
There are lots of great examples out there. Décor-wise SoulCycle is great, and it has some very good instructors. The workout isn’t for me though, with too much high-speed stuff out of the saddle. In terms of the workout, I love Flywheel – it’s more athletic, more about interval training. Space Cycle in Shanghai is very cool too, as are some of the immersive studios we’ve worked with around the world: TMPL in New York City and Pure Fitness in Hong Kong, for example.

But in terms of overall experience, my two current favourites are London’s 1Rebel Victoria and the new TRIP studio in our Les Mills Auckland club. 1Rebel Victoria has done something incredible. It’s the single best group exercise studio in the world – a truly amazing experience – and it’s setting the standard for clubs around the globe. [Read more about 1Rebel Victoria in our interview with 1Rebel co-founder James Balfour.]

Meanwhile, in Auckland, we have 100 bikes in a theatre-style studio that’s been designed by some hot young architects. The studio is dark, illuminated from the front by a concave screen – 20m wide by 3m high – on which we run our immersive cycling classes, THE TRIP. We’re now on the 16th release of THE TRIP, with US$500,000 investment going into the production of each class, and it’s a truly addictive experience. I do it three times a week!

Tell us a bit more about THE TRIP…
When we first launched THE TRIP, we were adamant that the screens had to be huge, but re-cently we’ve realised it can still work on smaller screens. If you have a 4×3 mosaic screen – that is, 12 smaller screens joined together – the experience can still be immersive for up to 35 people. Even on regular 3m-wide virtual screens, it’s great.

This has helped THE TRIP to explode: since we launched these new formats and virtual TRIP three months ago, we’ve gone from just a handful of studios around the world to over 100 installations sold. I have absolute confi-dence that it’s going to be the next big thing, available in thousands of clubs over the next few years. It leapfrogs any club’s studio ahead of even the best boutiques.

Finally, let’s chat about Peloton and the impact this has had on the market…
The at-home fitness market is a huge category and always has been, right back to the days of Jane Fonda workout videos. Our research shows that 83 per cent of those who have gym mem-berships also exercise at home.

What’s happening now is simply that the technology is evolving, facilitating products like Peloton and Zwift. There’s a lot of content streamed online too, although here it’s often a case of quantity over quality – there’s a lot of rubbish out there. But overall, the range of at-home exercise options is growing fast.

In terms of Peloton specifically, it’s doing very well as a business and I love what it’s doing for cycling as a whole. But it is quite a simple prod-uct in terms of its content, simply streaming live classes out of a studio. Some of its teachers are quite good, but generally, I’d have to be honest and say the classes aren’t fabulous compared to other virtual classes that have been well choreo-graphed, filmed in great locations using multiple camera angles and top cameramen. You can get bored after a while

So, what’s driving Peloton’s success? The tech is good, but it isn’t the live streaming that’s ultimately driving its appeal: only a small proportion of Peloton users take part in these classes, with most going back into the pre-recorded library to pick their favourites. Lots of people just use the Peloton app on their own bikes.

What Peloton has done absolutely brilliantly – and the same goes for SoulCycle – is an amazing marketing job. Both these brands have succeed-ed in bringing bikes back to the fore, so I really want to see them do well. They’ve done great things for the category. Really, the whole indus-try can now benefit from what they’ve done.