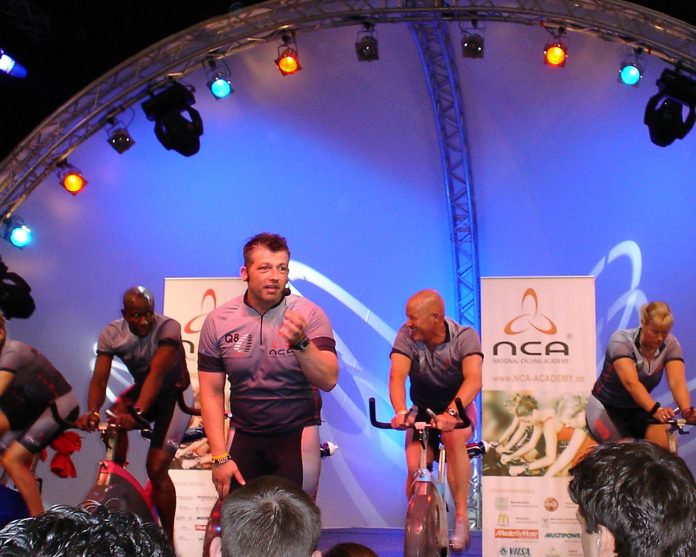 World record-breaking events, thousands donated to charity, and an appeal to instructors to leave their egos at the door. Ralph Butzin – founder of Germany’s National Cycling Academy and one of the country’s Spinning pioneers – speaks to Kate Cracknell.

“I used to be a professional handball player, competing in the first division in Germany,” says German cycling legend Ralph Butzin. “In 1993, I injured my knee and went to Switzerland for rehab, and it was there I first came across Spinning – the phenomenon of indoor cycling to music.

“I liked the look of it so I did a class, which just happened to be with Mike Michaels – master trainer for Johnny G, the creator of Spinning. That’s a great way to do your first class!

“I spoke to Mike afterwards and explained that I’d like to do these classes back home, but he told me there were no Spinner bikes in Germany – so I decided to start my own class.”

He continues: “I teamed up with another master trainer, Keith Howells, to launch in the basement of a club in Bielefeld, Germany. We had a squash court space with 11 bikes and a ghetto blaster – and that was it. There was very little structure: we just played music and got people to ride the bikes as hard as they could! But it was really popular: with just 11 bikes, we had to run around eight classes a day to keep up with demand.

“For a long time, this was essentially what I did: instructing Spin classes, creating education for Schwinn, building a national team for Schwinn and later Star Trac. But then a crunch point came when the team split: Johnny G went with Star Trac; most of the other trainers went with Schwinn. And the whole thing just started to move along a path I wasn’t happy with: it became more about selling bikes and merchandise, when really all I wanted to do was train people.

“In 2003, I therefore left to set up my own company: the National Cycling Academy, or NCA for short, which was created as a supplier-neutral organisation.”

You can’t buy personality
He continues: “At the NCA, we aim to do things a bit differently. Most cycling instructor qualifications take place over the space of one weekend, for example, whereas ours takes two weekends and is always run by two master trainers. There’s just so much you need to know when you’re starting out as an instructor.

“We focus on training – on the science – rather than gimmicks, and encourage our students to always do the same in the classes they go on to deliver. Gimmicks quickly lose their appeal; training is relevant for a lifetime.

“And we help them find jobs afterwards: we approach clubs to tell them about instructors living locally. This is a free service, firstly because we feel it’s the right thing to do, and secondly because it helps us build a strong network of clubs and trainers.”

Butzin adds: “One thing all of our participants leave our courses with is this simple message: it isn’t about them. They work for the members. If there’s nobody in their class, there’s no need for them as an instructor. They learn to leave their egos at the door and focus on creating a great experience for members.

“In fact, this is partly why we don’t sell other qualifications. In our view, just paying your way through lots of courses doesn’t make you a great instructor. It doesn’t matter if you’re a master trainer or a newly qualified instructor: your personality is the way to people’s hearts.

“If people do feel they want to learn more further down the line, though, we invite them to attend our events for free to chat to our master trainers. Sharing ideas and knowledge is, we believe, the best way to learn, and we give a lot away for free: whatever they want to know, our master trainers share it with them at no charge. We aren’t interested in getting every last Euro out of people.”

He adds: “What this does, of course, is build great relationships between the NCA and the instructors – so when we need to ask for their help, they’re happy to give it.”

Pursuing a dream
The help Butzin refers to relates to public events he runs under the NCA banner: instructors are invited and encouraged to bring members and other cycling enthusiasts along with them. So, a favour perhaps, but not a huge one – especially as good trainers are invited on-stage to run some of the classes. “I don’t believe in making it just about master trainers,” explains Butzin. “These are events for trainers and their members.”

My dream, when I first set up the NCA, was to run the biggest cycling event in the world

He rewinds to the early days: “My dream, when I first set up the NCA, was to run the biggest cycling event in the world. I started small: my first event was in 2003, with 70 bikes in a sports club in northern Germany. It was an overnight event – eight hours, from midnight to 8.00am – and people had to pay 30 Deutschmark to take part. I did absolutely everything myself: I organised the bikes, drove the lorry to get them to the venue, instructed the classes, gave out water… But it went well, so I decided to scale things up.

“For the next four or five years, I ran two events each year: in the winter, the event took place in a Mercedes Benz centre with around 200 bikes; in the summer, we could go outdoors so had more space, so we ran events with 500–700 bikes in a village called Bad Zwischenahn. The events would go on for anything from 12 to 24 hours, with lots of different sessions and instructors on-stage. Participants could vote on how good they were, with an award at the end for the best trainer. It was a bit like all the reality TV shows nowadays!

“People would also pay to attend these events, and I got lots of sponsors involved too: they liked the fact that, once we’d covered our costs, all the rest of the money raised through these events would immediately be donated to charity… children’s hospices and so on.

“In between these events, I’d travel around the country talking to sports clubs and gyms and running small cycling events for them. I got Erdinger, the beer brand, to sponsor what became known as the Erdinger City Tour: smaller in-club events, where clubs would get alcohol-free beer to give out.”

Breaking records
Butzin continues his story: “At this point, the NCA was still just a hobby for me – I had a full-time job working for the government – but in 2006, I decided to leave my job and live my passion full-time, pursuing my dream to create the biggest cycling event in the world.

“I identified the venue I wanted to rent – the AWD Dome in Bremen, northern Germany – and knew I wanted to fill it with 3,000 bikes. I scheduled the event for August 2007 and spent the next 18 months travelling around clubs, running classes for them for free, talking to them about my dream and asking: ‘Please could I borrow your bikes?’ However many bikes they agreed to lend me for the day, that’s how many tickets they got for the event, which they could then offer to their members.

“When the day came, we had a real mix of bikes coming from all over the country, all of which had to be brought to the Dome and taken out again in the same day – because it cost €70,000 to rent the venue for one day but also, obviously, because the clubs needed them back.

“But it worked. We had thousands of attendees, great classes over the space of eight hours, a live band, hot food for everyone, water and fruit delivered regularly to every bike… And it was just a great feeling: everyone was on an emotional high afterwards.

“Admittedly I lost €70,000 on the event, but that wasn’t important to me – I just wanted to make my dream come true. That said, the bank didn’t feel quite the same way: I had to run a subsequent smaller event to make the money back!”

Cycling for energy
Fast-forward to today and the NCA is still running events, with the current wave adopting an energy theme, as Butzin explains: “In 2015, 2016 and 2017, we ran 24-hour events where we attached dynamos to the bikes to capture the human energy being generated, using this to charge the battery of an electric car.

“We actually set a Guinness World Record: 2,500 people – just normal people, not athletes – rode 100 bikes and generated enough energy for the Minister of Economy to drive the car for 130km.”

He adds: “We also continue to raise large amounts for charity: over the last three years alone, we’ve donated around €45,000 to good causes.

“Our next event is scheduled to take place in November 2019. Volkswagen is launching a new car and wants us to run an energy-harvesting event – much like the recent ones we’ve organised – to help promote it. So, we’ll be looking for teams of cyclists to take part!”

The German challenge
But when I broach the topic of new trends in indoor cycling, the exciting boutique studios appearing around the world, and what the future might look like for indoor cycling in Germany, Butzin falls uncharacteristically quiet. “I hate to have to say this, but indoor cycling is dying in Germany,” he says. “Most club operators question the return on investment: they have bikes to buy and maintain, and instructors to pay, but only run perhaps two classes a day. The rest of the time, the studios – and the bikes – are unused. As a result, operators are starting to pull indoor cycling off the timetable.”

He continues: “The NCA does what it can to keep the momentum going, but in the end we do what we do for fun. Meanwhile, very few of the world’s big, powerful cycling brands have a strong presence in Germany. The positive spirit around indoor cycling has gone in our market.

“But it isn’t too late. We simply need new inspiration. My idea would be for someone – a pioneering supplier – to buy a lorry and put 50 bikes on it, along with a great sound system, a good sponsor and fantastic instructors. Get out there and show people what great indoor cycling looks like.

“There are 40 major cities in Germany, so spend a year touring. Bring it to the people – let them try it for themselves, then tell them where they can do indoor cycling locally.

“Talk to the operators about their challenges and propose a new model: one where the bikes are on the gym floor rather than tucked away in a studio. There’s no reason at all why indoor cycling classes can’t take place on a gym floor, with the bikes then available for general gym use the rest of the time.

“Get health insurance companies involved as sponsors, so the costs are covered. Get in touch with the local authorities to find a neutral space where all club operators will be happy to go: you’ll get the authorities on-side by promising to donate every cent of the €10 participation fees to local charities. Get the Health Minister aware. And secure TV and other media coverage to create a buzz around the whole thing; heart attacks remain Germany’s biggest killer, so encouraging people to cycle is a great media-friendly message, as is donating all proceeds to local hospitals.

“If we get the right people on-board, we can do this.”

Johnny G the inventor of spinning