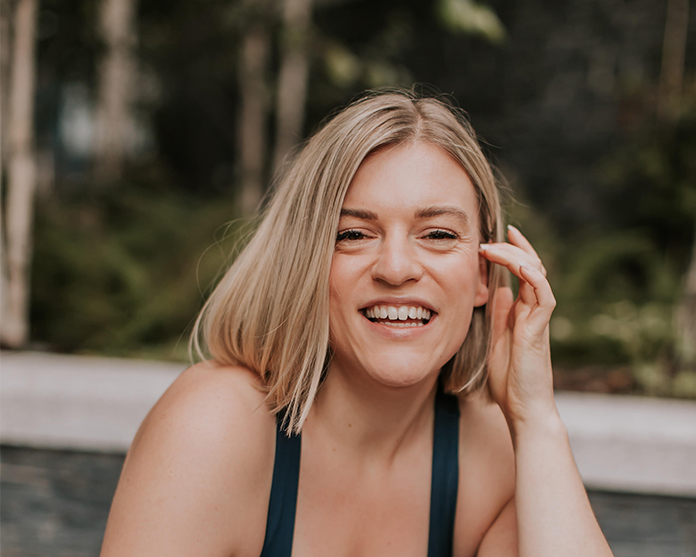 What has been your personal fitness journey?

I first became interested in fitness when I was at drama school, training to be a musical theatre performer. I started sharing fitness content online in 2013 and decided to qualify as a personal trainer when I graduated in 2014.

At the time, I imagined I would also audition for musical theatre roles, but fitness really took off for me and I loved what I was doing. I found myself in that fortunate position where I had a hobby, a passion, that became a career.

In hindsight, though, my relationship with fitness was quite disordered. I over-exercised and didn’t eat enough, because that’s what I understood fitness to be based on everything I saw online. I thought fitness had to be a weight loss journey. That restriction was unavoidable.

I now know that doesn’t have to be the case. Fitness has been a constant for me, but my approach and my relationship with it has changed dramatically.

What’s your approach to exercise now?

I now focus on movement that makes your body feel good. So many people see fitness as a chore to tick off the list rather than something they genuinely want to do. They think they have to endure a painful workout that’s going to exhaust them, all in a bid to look a certain way. They think that’s what fitness is all about.

This is what I encourage people to focus on. In the process, I help them take the pressure off themselves and have fun again, so they actually enjoy their workouts.

Tell us more about your exercise philosophy.

I found myself becoming really disillusioned with the way fitness was positioning itself. It was the same old content all the time – all those before and after photos that implied fitness was only worthwhile if it brought about a drastic physical change.

In my podcast and my book, Train Happy: An Intuitive Exercise Plan for Every Body – published in January 2020 – we therefore talk about Intuitive Movement. 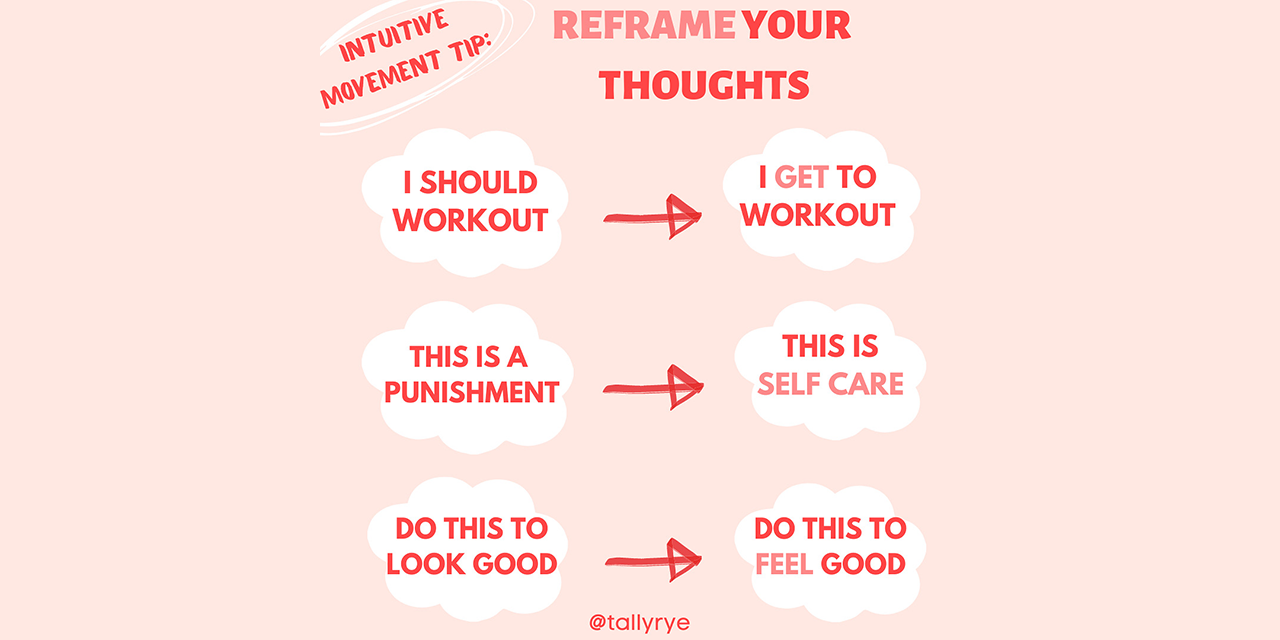 Intuitive Movement is about learning to listen to your body and connect with yourself so you can make the best choices for you, moving your body in the way that feels best for you. It’s about taking ownership and autonomy over your own fitness journey, rather than just doing what others say you should do. Ultimately, it’s about help people feel happy in their relationship with movement.

You have 107,000 Instagram followers. How do you use your influence?

I was in the right place at the right time – that first generation of social media influencers who have all since found our niche – and it’s meant I’m one of a small handful of people, certainly in the UK, who have the profile to talk about important topics like intuitive movement.

I’m trying to show people a path to feeling free of pressure and I get a lot of feedback telling me how much my message resonates with them. How they didn’t realise they could think about things this way, and that what I’ve said has made them feel so much better about their body, about food, about exercise.

I’m not saying everything i post is original thinking, but i do have the platform to say it louder than others

I’m also quite vocal about therapy and mental health, and I’ve had a lot of people tell me they’ve decided to go for therapy after hearing what I have to say. That’s so cool, because I believe the way we think about food, movement and our bodies is underpinned by our mental health – by what’s going on in our brains.

There aren’t many people out there with my approach, and while I’m not saying everything I post is original thinking, I do have the platform to say it louder than others. I’m very conscious of the voice I have and find the more I stay true to my values and passions, the more people seem to come on-board.

I think people follow me because I’m open about my own experiences, honest about my own struggles. I’m not just an online expert telling you what to do: I bring a humanness to it and people can relate to me.

What would you like to see happen in the fitness sector?

It really frustrates me when trainers suggest it’s just a small group of people who have risk factors that may develop into a disordered relationship with food and/or exercise. That just isn’t true. The fitness sector has normalised disorder. Restrictive behaviours are almost recommended, to the point that people think this is what fitness is.

It isn’t though. Those behaviours are dieting. Fitness is separate and should be non-restrictive. It can’t just be about burning calories. It has to be about engaging people in movement in a way that makes them feel good about themselves.

We have to stop centring on the narrative of weight loss and instead focus on the many, many other benefits of fitness. Stop the before and after photos where all the praise is heaped on the smaller body. Stop using the same buff fitness models. Stop assuming everyone wants to lose weight, and indeed making them feel they have to.

Let’s talk about your role at Digme…

I’ve been instructing indoor cycling classes for six years and have been with Digme for three. I’m delighted by how supportive they are, how on-board they are with my approach. The owners are fantastic: they live and breathe it and are great at taking on feedback.

My language when instructing has subtly changed over the years, just as it has on my social media. My goal now is to ensure everyone enjoys themselves and leaves the room elated, high on endorphins.

I make no assumptions about anyone in the room, instead encouraging participants to trust themselves to make their own decisions on how hard to work that day, to take a moment whenever they need it, to choose the gears and the intensity that feels right for them. I’m not there as a sergeant major. I tell them: “I’ll guide you, but you be you. It’s your workout and you know your body best.”

I also make a point of ending each class by congratulating participants for making time for themselves, encouraging them to be very proud that they did that for themselves. I really want to emphasise the view that exercise is self-care, not self-punishment. That we aren’t there to feel less guilty, but to feel good.

people ultimately choose a class for the instructor, so be confident and enjoy finding your unique style

Any advice for other instructors?

Be yourself. Even if you instruct a set class format, you can still bring your own take to it. Participants ultimately choose a class for the instructor, so be confident, put your own mark on the workout and enjoy finding your unique style.

What do you love about indoor cycling?

I fell into indoor cycling by chance, when I was PT-ing at a gym and was asked to cover a class, but I grew to love it.

I instruct rhythm classes, which means letting go and moving to the music. There’s no data on-screen, no competition, no need to take it too seriously. You don’t always even realise how hard you’re working. I know cycling isn’t for everyone, but I find it a fun way to do cardio. I often take myself to the gym to get on a bike and try out my new ideas and playlists.

I think it’s the musicality, the ‘move to the beat’ choreography, that really does it for me. Especially in class, it brings out the musical theatre performer in me: once I have my Britney headset on and the lights are going… that’s where I get my kick!

What’s next for you?

I never really know what’s coming next – I never expected to write a book, for example – but I will certainly continue to spread the intuitive movement message. I want to keep growing my podcast and my online presence so I can present even more people with an alternative, helping them establish a more positive relationship with fitness.