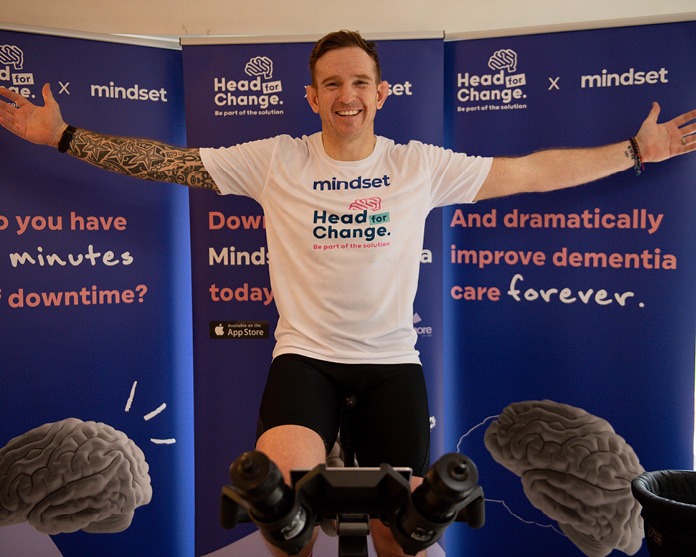 A recent cycling event raised over £58,000 for newly formed charity Head for Change – but cycling isn’t just a way to raise money for Alix Popham, the former Welsh rugby international. It’s also part of a daily routine designed to slow his own cognitive decline. He speaks to Kate Cracknell

Brain health has hit the news over recent months, with a growing number of former rugby and football players being diagnosed with early-onset dementia – the result of countless brain traumas over the years of playing their chosen sport.

Former Welsh rugby international Alix Popham is among them. “But rather than dwell on it or feel sorry for myself, I’m trying to be as positive as possible,” he explains. The result is not only a personal mission to stay as well as he can for as long as he can, but a new charitable foundation – Head for Change – which he launched with his wife Mel in January 2021 and which kicked off with a headline-grabbing fundraiser, the Rugby Ride Challenge, in March.

We talk to Popham about his story, his hopes for the foundation, and the recent cycling challenge.

Alix, you won 33 caps for Wales. What were your career highlights?
I remember my career from my younger years pretty well. I started playing at the age of four and most of my childhood revolved around rugby: training, tours, tournaments. I was in a very good team from the age of four to 17 and rugby became my everyday life.

I know what I did because I have it written down. But 95% of it I don’t really remember.

But as we progress into my professional career, the memories become less clear. I know what I did, and who I played for, because I have it written down. But I would say probably 95 per cent of it I don’t really remember.

My last game for Wales, for example, in 2008: we beat England at Twickenham for the first time in 22 years. I know I played in the game, because I have the jersey on the wall, but I have no recollection of being at Twickenham. When I watched the replay on TV last year, it felt like the first time I’d seen it.

The way my neuropsychologist explained it to me: my brain became so inflamed during that period – the result of taking so much contact during training and games – that my mind was taking photos of what was happening, but there was no ‘film’ to store those memories.

When did you realise something was wrong?
Things hadn’t been right for some time. For a while, my wife Mel thought I wasn’t listening to her or that I was going deaf, because especially in a group environment – with lots of people talking – I would struggle to take in what people were saying. I would often lose my train of thought, too, and struggle to concentrate. I’d use the wrong words for things, or simply forget the word for a very simple everyday object. And I’d get severe headaches, especially if I was feeling stressed.

Around June of 2019, Mel suggested I go to the doctor, but I was convinced it was just work stress. It was only on a bike ride at the beginning of September that year – when I suddenly found myself totally lost, in spite of having done the route hundreds of times before – that I went to see my GP, who fortunately was also a neurologist, and testing began.

Current Welsh and English rugby players are doing 230–240 contact days a year. That has to be reduced.

My MRI scan and neuro-psychological assessment didn’t provide any real answers as to the cause of my symptoms, though, so I was introduced to a neurologist who specialised in sports head injuries. The resulting DTI scan picked up five areas in my brain that were significantly damaged and, on 16 April 2020, the diagnosis was made. I had early onset dementia as a result of repetitive brain trauma.

How did Head for Change come about?
I have three daughters – aged 16, 12 and three – so at that point, Mel and I started googling ‘how to tell teenagers that their dad has early onset dementia’. All the information related to grandparents, though; there was nothing helpful we could take away to talk to our kids about.

Luckily we were put in touch with a wonderful woman, Dr Judith Gates, whose husband Bill previously played for Middlesbrough FC. He also has dementia, and Judith helped us role-play how to tell the girls.

But off the back of this, we realised there was a desperate need for support for all those going through the same thing. At the time I was being tested, there were only around 15 other guys going through the tests. Now there are about 250 in the UK alone, and I imagine thousands more men and women struggling, being wrongly diagnosed as depressed, drinking too much, even attempting suicide.

We wanted to get information out there as quickly as possible to support ex-players and their families. Head for Change is the result.

What is the foundation hoping to achieve?
We’re in start-up mode at the moment, but we’re already aware of loads of great research projects going on around the world. The problem is, nobody’s really talking to each other. We want to try and bring together all the best brains in the world to build a body of research, and come up with solutions, to help those diagnosed.

We want to provide support and information for those affected, and their families.

And we want to encourage change within the sport to make the game safe, so parents are still happy for their kids to play. That means reducing the amount of contact in training; it’s believed 85 per cent of the damage to my brain was done during training sessions. In the NFL, players have a maximum of 32 days of contact a year, but I’ve spoken to current Welsh and English rugby players who are doing three or four contact training sessions a week, plus matches. That’s 230–240 contact days a year, and that has to be reduced.

I’d also like to see regular player MOTs and an injury database so players’ history can be tracked, even if they move clubs. And I want to see more education across the board, starting at grassroots, so everyone who gets a knock to the head knows to take it seriously.

I believe there’s a lot of positive change we can introduce to protect players and the game we love. If all of this and I were starting out in my rugby career now, I’d happily do it – but otherwise, no.

Taking place on 6–7 March 2021, the event was organised in collaboration with Zwift, so everyone was cycling the same virtual course. Over the two days, almost 2,000 people took part; it was 12 hours a day, broken down into two-hour sessions, and you could take part in anything from two hours to the full 24.

Cycling pro Geraint Thomas got in touch when he heard about the foundation, and he completed three two-hour stages on Sunday, but we had over 100 former international rugby stars taking part too, as well as hundreds of members of public. Each participant was asked to compete on behalf of their nation – England, Ireland, Scotland, Wales or Rest of the World – with the miles they racked up going to their team’s total.

Between them, the participants cycled an incredible 106,495 miles over the space of the weekend, raising over £58,000 for Head for Change. Team England topped the total mileage leaderboard with 20,174 miles; Team Wales came out on top on an average miles per capita basis. As part of Team Wales, I personally cycled 408 miles over the two days, raising £3,012.

We’re hoping the success of this event will now spur people on to become community champions for the foundation, organising their own events to raise funds and much-needed awareness.

Even if all someone does is sign up for our newsletter, that’s OK. We just want people to be having these conversations, to be aware, to get involved.

How important is exercise to you these days?
I try to do as many of the things that help me feel good, and that help my family, as I can. That means regular exercise, a Mediterranean diet, the various therapies I’m finding beneficial – using a hyperbaric chamber, infrared sauna and red light therapy, for example – and cutting stress out of my life where possible. These are all the 1 per cents that will hopefully add up to keep me here, the way I am, for as long as possible.

In terms of exercise, I’m sure other sportsmen and women are the same, but I still get a great feeling after training, setting myself up for the day. I was never really into long runs, but I’ve always enjoyed cycling, both for the exercise and for the social aspect of going out for a ride with friends. Now I’m putting the hours in on my BODY BIKE, which I love – not least because it’s silent, so I can watch my box sets without turning up the TV to the point I deafen the family! I’ll sometimes train on Zwift with friends, too.

Research by professor Damian Bailey – who’s worked in this field for 20 years – shows that former pro-rugby players are getting to the age of 60 and presenting with the brain health of a 75- or 80-year-old. However, his studies also show the increased flow of blood and oxygen to the brain when you exercise can help slow the progress of dementia. We’re now looking to do some more research in this area, specifically among former players diagnosed with early onset dementia.

Importantly, though, professor Bailey’s research shows that exercise is important for everyone’s brain health, not just former sports stars. He’s shown that a normal person who exercises three times a week throughout their life will, by the time they’re 60 years old, have the brain health of a 40-year-old.

Given that dementia is set to be the biggest killer in the UK in a matter of years, we’re therefore keen to educate everyone about the importance to their brain health of staying active.