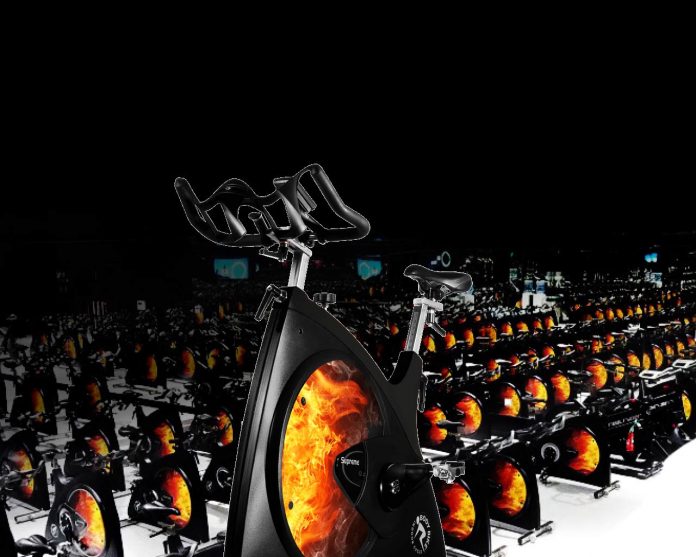 Back in November, the largest indoor cycling studio in the Middle East was revealed at the Abu Dhabi Country Club in the United Arab Emirates. A massive studio equipped with 75 BODY BIKE® Supremes customized with our FIRE design on the hatches.

The idea behind the studio was to create a club-like atmosphere: The lights are synced with the music and because of the mirrors everywhere and the very distinct flames on the bikes, it really feels like going clubbing. Two 65” Smart TVs display the MyZone Group Heart Rate Training giving the members feedback on their effort.

The 75 bikes are a mix between refurbished and new ones supplied by RS Fitness, exclusive BODY BIKE® distributor in the United Arab Emirates. Leonardo Lopez, GFX Manager at the Abu Dhabi Country Club, states: ‘BODY BIKE for us is the best indoor cycling bike in the market – 100% reliable and easy to maintain. We decided to go with the FIRE design to give to our participants a dramatic visual input. Now they call Studio 1 ‘The Burning Room!’

And about choice of supplier, he continues:

Basically, we chose RS Fitness because they are very professional. We have a great working relationship with them not only providing bikes but also great technical support and servicing them 4 times a year.’

The Abu Dhabi Country Club is located in Abu Dhabi, the capital city of the United Arab Emirates. It is the first and most exclusive health and fitness club of its kind in the UAE capital and has 4,000 members.

Ride On is now Ride High

The journey by Intelligent Cycling